Huawei’s phone business may be embattled – to put it mildly – but it hasn’t stopped making new phones. Most of them haven’t made it to European shores however, with one notable exception: the Huawei Nova 9.

It’s not clear why, of all phones, the Nova 9 is the one to reach Europe – especially when we’re still waiting for the P50 Pro – but it really embodies Huawei’s current situation, with impressive hardware hamstrung by familiar software problems.

One thing you can’t fault the Nova 9 on is how it looks, especially in the hero ‘Starry Blue’ colour I’ve been testing out, which also has a subtly grippy, textured back.

While this is a large phone thanks to the 6.57in display, it’s still thin at 7.8mm and light at 175g. That makes it feel portable and compact despite the large screen, and curved edges keep it comfortable to hold too.

The only really divisive element might be the rear camera module, which sees the main lens ensconced in one large circle, with three more shooters and the flash dropped in a second circle below. I don’t love the look, but you may – and you certainly couldn’t call it boring.

Note that sadly there’s no water or dust-resistant IP rating for the phone, nor does it use Gorilla Glass on the display, so it’s not as tough as some more expensive devices.

The final thing that does need noting here is that this design is essentially identical to the Honor 50, also available in the UK and Europe, except for the choice of finishes. The phones do differ in some other respects – the Huawei has the better camera, while the Honor has the crucial advantage of Google software – but if it’s the phone’s look that caught your eye then do at least consider the Honor too.

This is another fairly strong showing for the Nova 9. The 120Hz OLED panel here is a beauty, covering over a billion colours and handling HDR very nicely.

At 6.57in it’s a pretty big screen, though really that’s average for Android these days. It’s curved, but not extremely – essentially enough to make it comfortable and look attractive, but without compromising usage, so those nervous about curved screens shouldn’t have too much to worry about.

There’s also an under-display fingerprint reader, which I’ve found to be fast and reliable. Face unlock is available if you prefer, though driven only by a single selfie camera, so it’s not as secure as Apple’s implementation.

On the audio side it’s backed up by a decent enough speaker, though there’s no stereo support. This is fine for a phone, but nothing special. As you might expect, there’s no 3.5mm headphone jack either.

The Nova 9 is a firmly mid-range device, and so uses Qualcomm’s Snapdragon 778G chipset. It’s paired with 8GB of RAM and either 128GB or 256GB of storage, with availability varying a bit by market.

This isn’t the fastest or most powerful phone on the market, but it’s got more than enough power for the average user. It’s smooth and fluid even when multi-tasking, and there’s enough oomph to run any modern smartphone game too.

Looking at our benchmark results, you’ll see that in the CPU-focussed Geekbench 5 the Nova 9 holds its own against all but the most powerful flagship and gaming phones, and doesn’t actually lag too far behind those anyway.

There is one big caveat looming over the Nova 9’s chipset though. One of the quirks of the US government’s trade restrictions on Huawei is that while the company can buy smartphone chipsets from Qualcomm, it can’t buy 5G-enabled chips. That means that as powerful as this phone is, it’s 4G-only. You may not mind this, especially if you live in a relatively rural area or a country with limited 5G uptake, but it definitely hurts if you’re looking to futureproof your phone purchase.

Battery life isn’t exactly a strength of the Nova 9 – but it’s certainly not a weakness either.

The 4300mAh battery here is enough for the phone to last a day’s use fairly comfortably, but not enough to stretch it to two days unless you’re an exceptionally light user. Fundamentally that makes the battery life fairly average for the modern market – you can easily find phones that last longer, but this is far from the worst out there.

It’ll do the job and last the day though, and that’s really what matters.

Charging is fairly impressive though, with 66W wired speeds supported. In my testing, that was enough to deliver 38% charge in 15 minutes, and 75% across half an hour – which is probably just enough to last a full day in itself.

If there’s one bit of phone hardware that Huawei excels at, it’s the camera. This is arguably the reason there’s still interest in the company’s flagship P50 phones without Google or 5G, as plenty of people will make that sacrifice in the name of what could be the best phone camera around.

To be clear, the Nova 9 isn’t packing the best phone camera around. But it does have a really capable camera, especially in the main lens – with diminishing returns beyond that.

The 50Mp main camera, encased in its own circular housing, uses Huawei’s RYYB pixel arrangement, which the company prefers especially for low light performance – though frustratingly here it isn’t combined with optical image stabilisation (OIS) which is key to really excellent night photography. 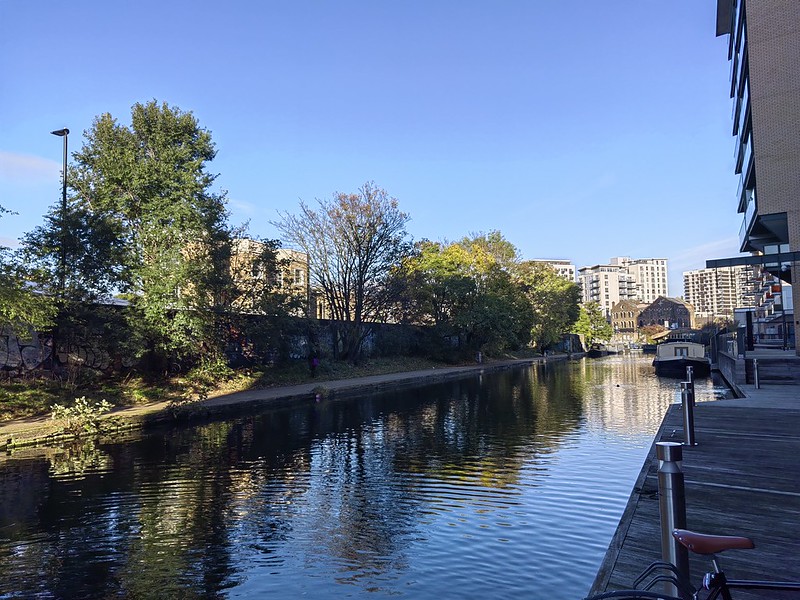 In any case, photos here broadly impress. In daylight the main camera is exceptional, with rich colours and vivid detail in a range of conditions. In darker lighting results are good, but the lack of OIS does show – when the camera gets it right you’ll find well exposed, detailed night mode photos with surprisingly accurate colour, but every now and then a shot will come back useless because there just fractionally too much camera shake and the phone’s electronic stabilisation couldn’t keep up.

On the rear you’ll also find an 8Mp ultrawide and 2Mp macro and depth sensors. These are fine, but forgettable. The ultrawide will do the job in decent lighting, but there’s a marked drop in detail compared to the main lens, and colours tend to be washed out. The difference is even more marked in low light.

The 32Mp selfie camera is pretty decent however, a relatively wide f/2.0 aperture helping it to hold its own in a range of lighting.

You can film [email protected] video with the rear cameras, and there’s also a dedicated vlogging mode that lets you record split-screen and picture-in-picture video with two lenses at once, including changing between them on the fly.

It’s only fair at this point to flag that the camera is one area where the Nova 9 does undoubtedly best the Honor 50. While the setups are mostly similar, the 50Mp main camera here is clearly superior to Honor’s 108Mp sensor, despite the lower resolution. No doubt Huawei’s unique image processing software and algorithms play their part too, but in any case the result is that this is a clear edge for the Nova 9 if you are trying to compare the two handsets.

The more things change, the more they stay the same.

In one sense, the Nova 9 offers a fairly new software experience, in EMUI 12, but in another there are some very familiar Huawei problems here.

This isn’t officially Android (though was initially developed from the Android Open Source Project), but it equally isn’t officially HarmonyOS, the new multi-platform operating system that now ships on the company’s phones in China, and on some of its tablets and wearables worldwide.

That said, I’ve used HarmonyOS on the MatePad Pro, and EMUI 12 is very similar. Uncannily so. So much so, that you might wonder if this is really HarmonyOS by another name.

I can’t speak to the source code, but I can confirm that this features touches like the iOS-esque control centre and Huawei ecosystem support that is found in HarmonyOS. Regardless of what this is at a technical level, in practical terms this is an extremely similar software experience to HarmonyOS.

Unfortunately, that includes some weaknesses. The same trade restrictions that prevent Huawei using 5G Qualcomm chips also stop the company from including Google Mobile Services on its phones. That means not only that the Nova 9 can’t install Google apps like Gmail or Google Maps, but also that there’s no Play Store so you can’t install many other Android apps.

Huawei has worked hard over the last few years to work around this problem, and there are some clever solutions. If you’re coming from a previous Android device you can transfer many of your apps over to the Nova 9, and the company’s Petal search engine does a good job of finding .apk files that let you install more apps too.

This is all well and good, but despite Huawei’s best efforts there remain some apps you simply cannot install, and others that will install but not run because they rely on Google’s servers. Others have stranger quirks – WhatsApp will run, but can’t access any Android (or iOS) chat backups, so you’ll be starting from scratch.

Updating apps is also a headache, as Google handles automatic updates. So for any apps installed through phone cloning or Petal search, you’ll have to manually update them – which is not only a headache, but also a potential security risk.

This is a smooth, attractive OS that’s easy to navigate and packs plenty of customisation options. But it’s only a viable option for those who are technically minded enough to work around its limitations.

The Nova 9 is available now in Europe, where it costs €499 for the 128GB model, and €549 for the 256GB variant. You can buy it directly from Huawei, or from Amazon and other retailers.

Huawei has clearly worked to hit an aggressive price point here to combat scepticism about the phone’s inherent deficiencies. The result is that this offers one of the better cameras at this price, along with competitive specs.

Still, should you spend this much for a phone that’s 4G-only, and doesn’t support Google apps? Probably not. A mere €30 more gets you the Honor 50, an otherwise almost-identical phone that fixes those two flaws. Yes, the Honor’s camera can’t quite compete with the Nova 9, but it’s still solid, and this phone will be a better buy for most people.

There are other mid-range phones to consider. The OnePlus Nord 2 is another strong competitor, with a decent camera and excellent specs for less than the Nova 9, while you don’t have to spend that much more to get the Google Pixel 6 for an even better camera. And yes, the Google phone does of course run Google.

There’s a lot to like about the Nova 9. It looks great, the display is sharp, and the main camera is a real triumph for the price – even if the accompanying ultrawide isn’t much to write home about.

But that’s still not enough to make this phone worth it for the average user. With no 5G networking and no support for the Google Play Store, the Nova 9 simply doesn’t add up for most people, especially in the fiercely competitive mid-range market.

At a much lower price the Nova 9’s limitations might be more forgivable, but as it is this is mostly a curio for the faithful, whether that’s lovers of Huawei hardware or those intrigued by the company’s efforts to carve out its own software space.

For the rest of us, there are simply better phones elsewhere.